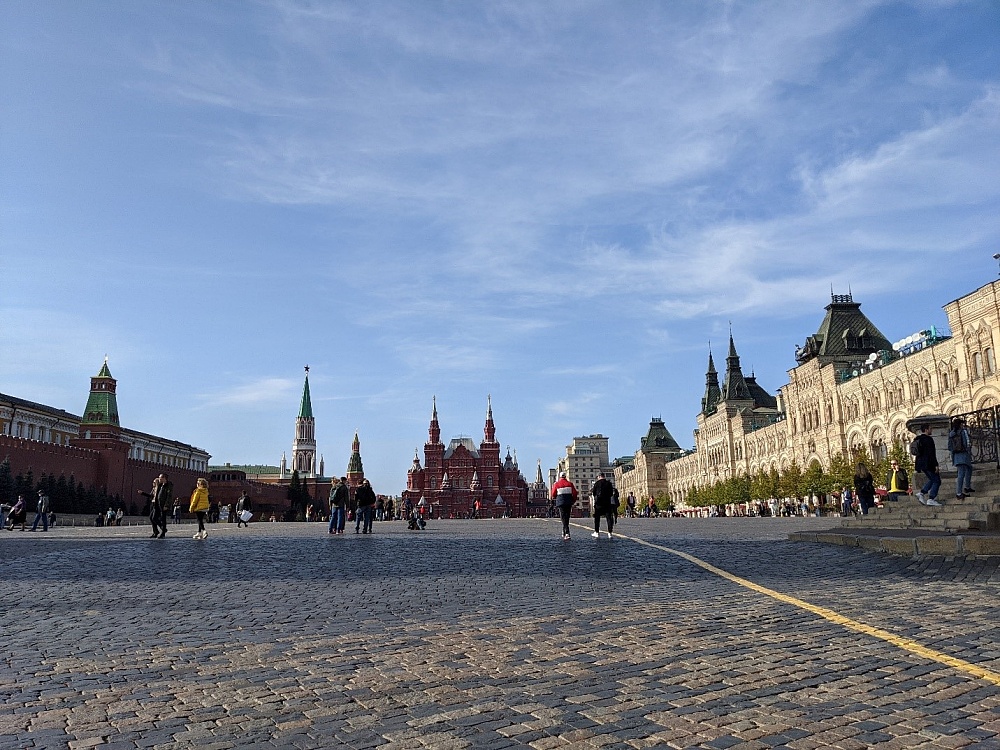 Red Square (Красная площадь) is the central square of Moscow since the city’s
major streets, which connect to Russia’s major highways, start here.
Geographically speaking, it is a real center of Russia. You can study the history of Russia
by exploring the buildings here. Look around and embrace this place that saw a lot,
from turmoil to glory. Red Square, literally translated as «красная» («red»), in folklore
means «beautiful» — «красивая,» the old meaning of red in Russian.
One finds different images depending on the season. In the summer,
there are festivals, concerts, and markets. In the winter, you can skate
and play hockey on the ice-rink in the middle of the square. Spring always
presents military parades to commemorate Victory Day, and the autumn brings
colorful foliage to emphasize the place’s beauty. Buildings on the square were
constructed at different times, but they are so thoroughly interwoven,
it is impossible to separate them when describing Red Square. They
all create a vivid fabric of Russian history and art. Everything that could
be said about Red Square has one description: unique. There is an impressive
fortress, a remarkable cathedral, a unique museum, and so on.


The Kremlin (Кремль) is a fortress that remembers Russian tsars and emperors,
wars and victories, ancient and modern life. Although it is an impenetrable fortress,
its style is beautiful and embellishes the center of the city and the center of the country. 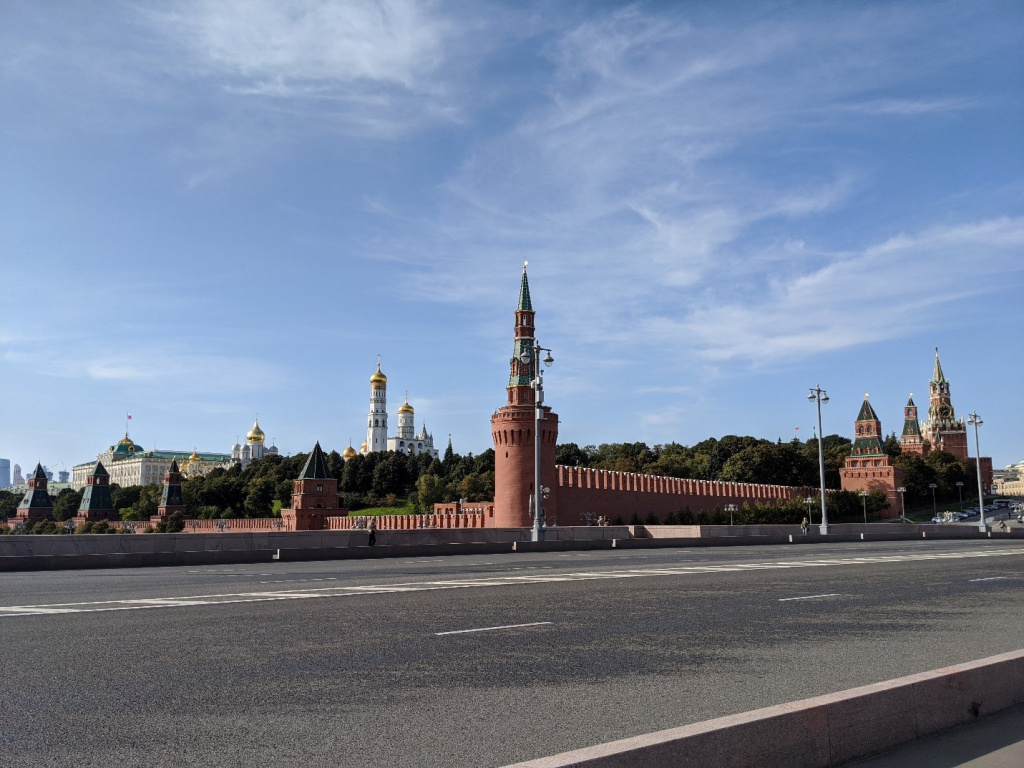 Like a small state, The Kremlin has everything for its efficient function and protection: the border and defense (Kremlin’s walls and towers, the Arsenal), the center (The Kremlin’s square, cathedrals, the bell tower, and the government buildings), places for entertainment (The Big Kremlin concert hall), its cultural heritage (Kremlin’s museums), greenery (Alexander’s garden), and solemn commemoration (Kremlin Wall Necropolis and Lenin’s mausoleum). It is like a rich mosaic with millions of pieces that reflect Russian history. Surrounded by the wall with the towers of various styles, it creates unique decorations for concerts and simple walking. 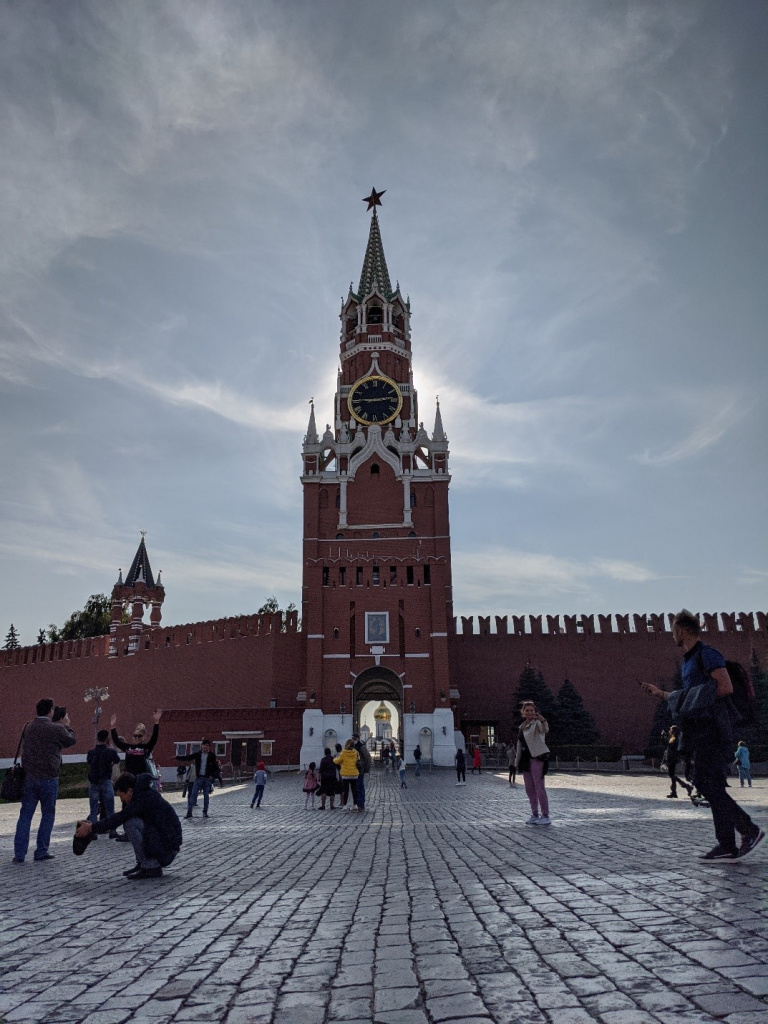 Lenin's Mausoleum (Мавзолей Ленина), also known as Lenin's Tomb, is currently the resting place of Vladimir Lenin (https://www.cnn.com/travel/article/lenin-mausoleum-moscow/index.html). In the monumental granite structure, built with elements of ancient mausoleums and pyramids, the preserved body of Vladimir Lenin is displayed for the public to pay tribute to the first Soviet leader. During the Soviet Union time, the Mausoleum was a tribune for the government who greeted Soviet people during parades and solemn military marches. 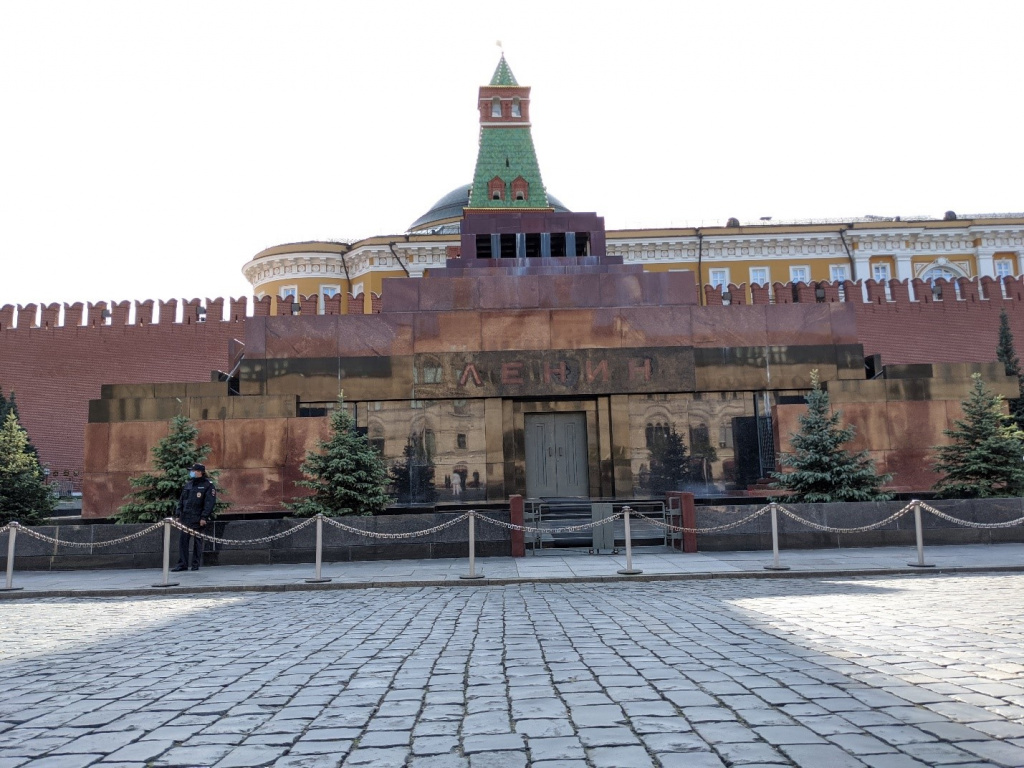 To continue a story of graveyards on Red Square amongst market places, cathedrals, and museums, the Kremlin Wall Necropolis (Кремлевская стена) needs to be mentioned (https://ritual.ru/poleznaya-informacia/articles/mogily-znamenitostej-u-kremlevskoj-steny/).

Begun in November 1917, when pro-Bolshevik victims of the October Revolution were buried in mass graves, it continued to be a necropolis until 1985. Since the last funeral, The Kremlin Wall Necropolis was designated as a protected landmark. Although it is really strange to have the burials besides social activities on Red Square that are never quiet, the memorial represents revolutionists and the nations’ world-famous personalities, like Maxim Gorky, Georgy Zhukov, and Yuri Gagarin.

The State Historical Museum (Государственный исторический музей) was founded in 1872 by the initiative of famous Russian historians Ivan Zabelin and Alexey Uvarov to create a place to promote Russian history and national self-awareness (https://catalog.shm.ru/). The idea was supported by the Moscow government and later Emperor Alexander III. Its exhibitions range from the prehistoric to the modern time. The building expresses the museum’s concept of Russian history and style. Rich outside, the interiors are intricately decorated in the Russian Revival style. 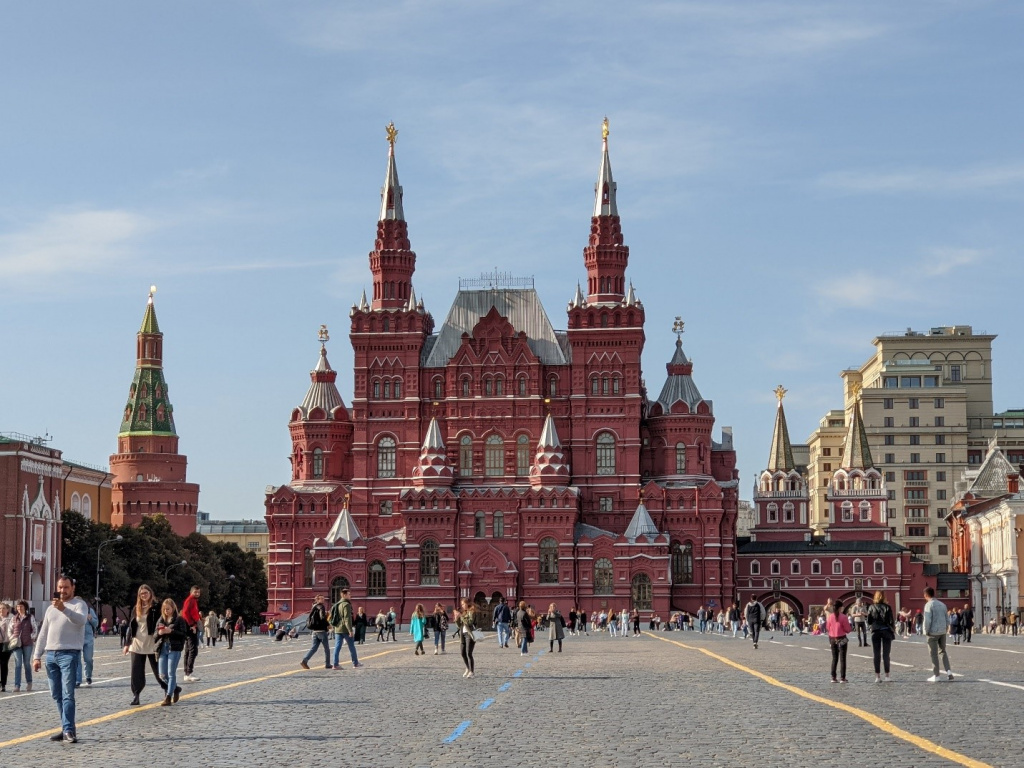 Saint Basil’s Cathedral (Собор Василия Блаженного) (https://www.britannica.com/topic/Saint-Basil-the-Blessed), a unique church embellished by all possible styles of Russian medieval architecture, opposes the State Historical Museum. It was built between 1554 and 1560 by Tsar Ivan IV (the Terrible) to commemorate his military victories over Kazan and Astrakhan khanates. It amazes the eye, and you never get tired observing variations of colors, shapes, and structures. Although the architect’s name is unknown, the legend says that two famous masters, Barma and Postnik, were blinded; they could not re-create the same masterpiece elsewhere. 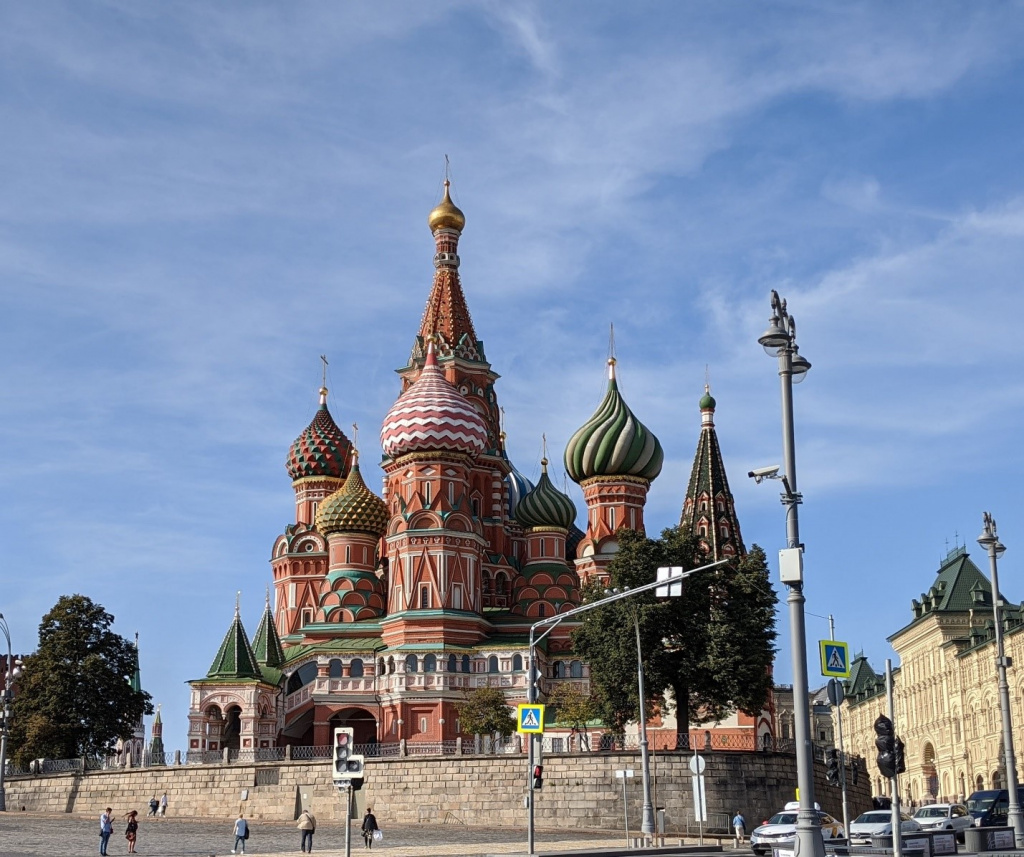 Despite the mysterious and terrible legend of its creation, the cathedral represents the epitome of real beauty. It is the most recognizable image of Russia and means it in the world. The building is shaped like the flame of a bonfire rising into the sky. Some compare the building with a holy ship sailing through sinful life. It is surrounded by trees and has a precisely defined foundation making. Being a combination of Russian medieval architecture, steel framework, and glass roof, the building does not repeat other structures on the square only echoes the neo-Russian style of the State Historical Museum. The glass roof looks light but is strong enough to bear snowfall accumulation.

The area was traditionally a centre of trade in Moscow and was called the Upper Trading Rows (Верхние торговые ряды). Its 242 m (794 ft.) façade faces the Kremlin along the eastern side of Red Square. Being a combination of Russian medieval architecture, steel framework, and glass roof, the building does not repeat other structures on the square only echoes the neo-Russian style of the State Historical Museum. The glass roof looks light, but is strong enough to bear snowfall
accumulation. 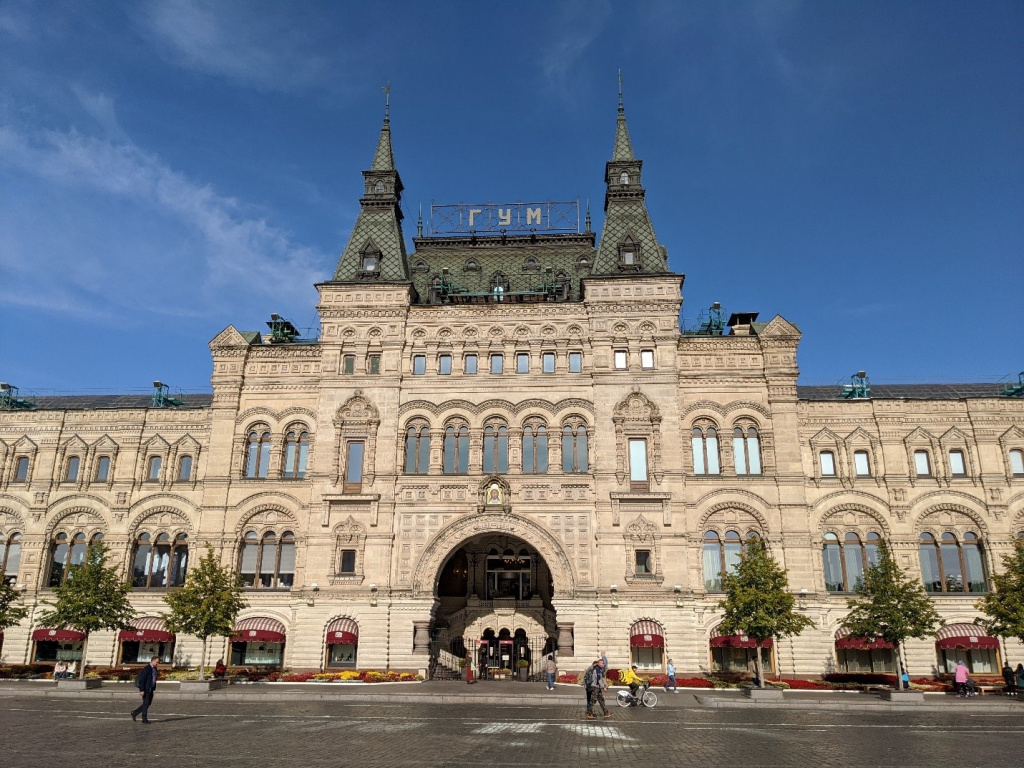 The building is interesting to observe during the day because of its intricate design and during the night because of the lights that graciously shape the entire structure. Nowadays, if you need to assign a meeting spot, it definitely should be the fountain in the middle of the store. To get a stunning view during dining in the center of Russia, the cafe with an outdoor terrace invites guests to have an unforgettable experience.

Zaryadye Park (Парк Зарядье) (https://www.zaryadyepark.ru/en/) is adjacent to the square. The place has a strange historical path. Being an area where foreign missions were situated in 16-19 centuries, in the Soviet Union time, it had the Rossiya Hotel that was demolished in 2006. The freed space received a new life when it was decided to create a park that observes Moscow.

Walking there, one can see the Kremlin, Moscow River, embankments, bridges, old historic areas - the list is endless. The park itself offers many activities in its Media center, Ice cave, Concert hall, and Amphitheater. It has a unique observation deck, the “Floating Bridge”, which goes almost to the middle of the Moscow River and sees Moscow’s panoramic view. People immediately named it a “tongue” because of its shape. Day or night, summer or winter, people like being here because of many reasons: central location, beautiful views, convenient and exciting facilities, including parking and restaurants, and of course, spectacular views. During national holidays the sight of fireworks is unforgettable. 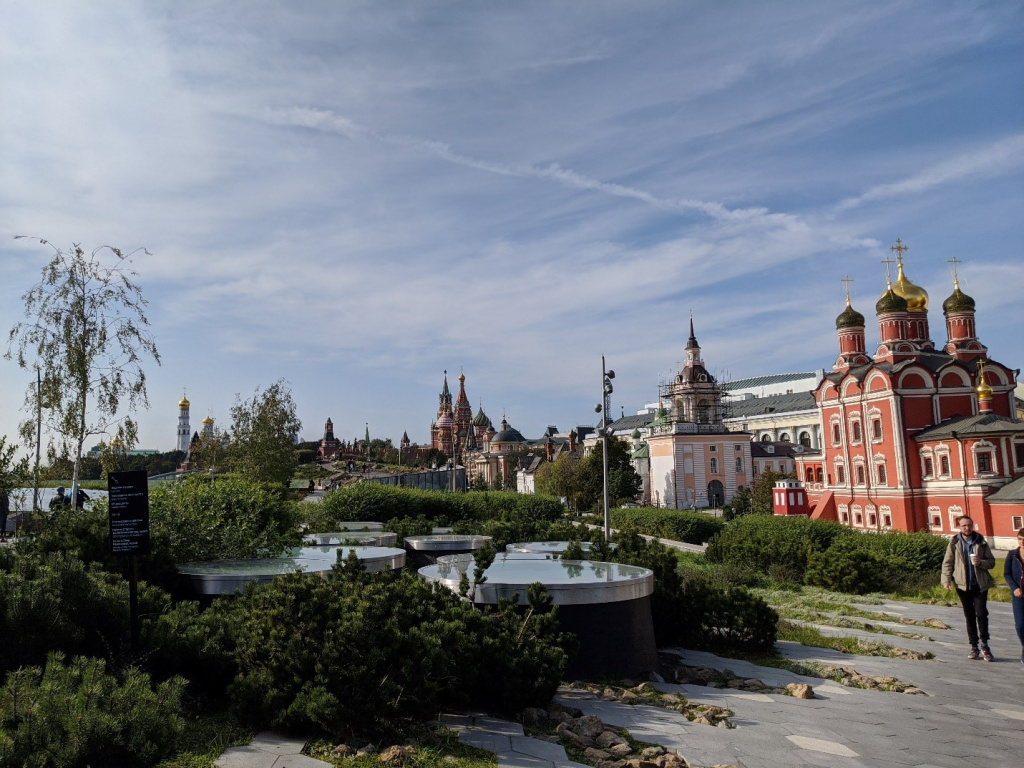 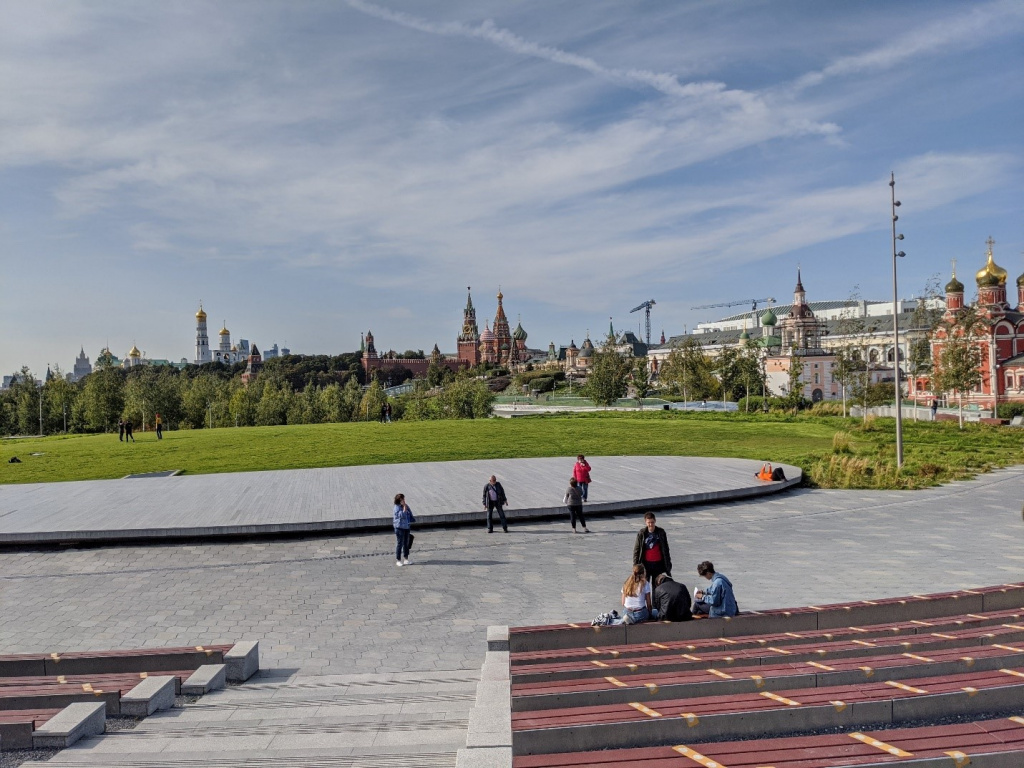 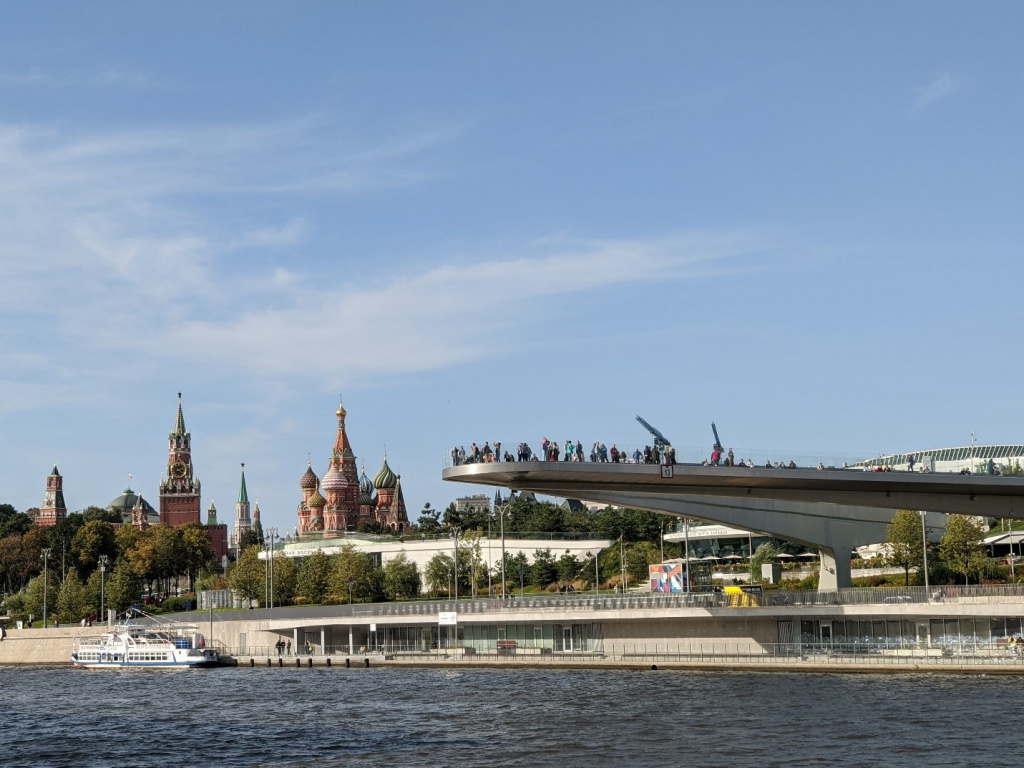 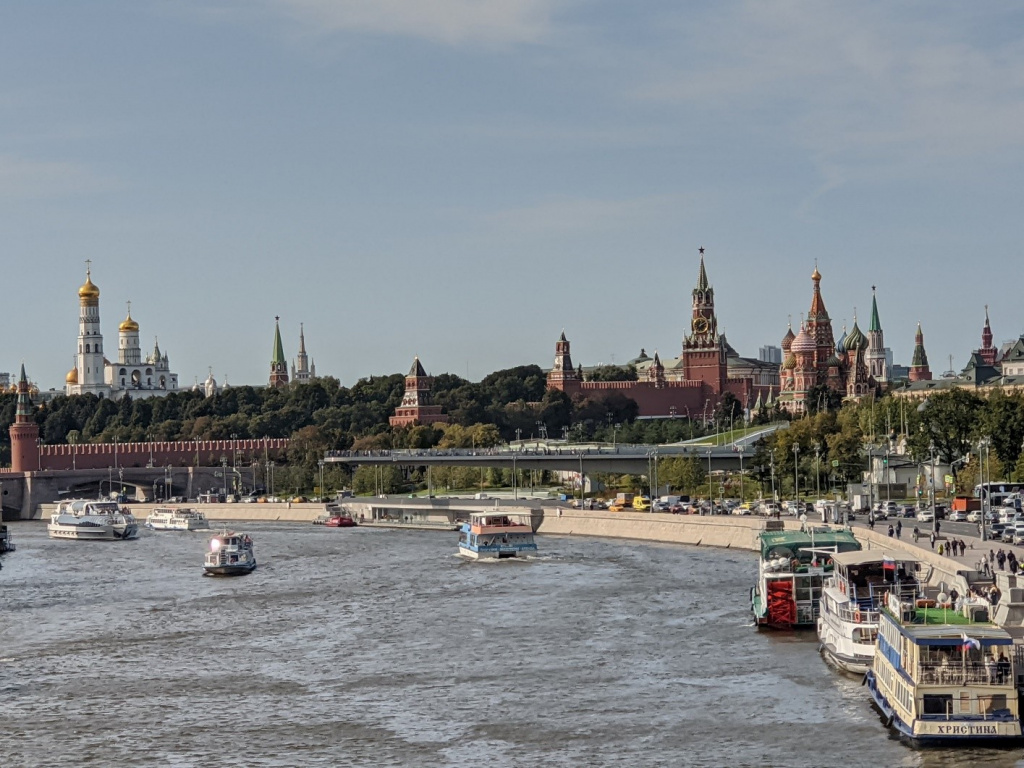 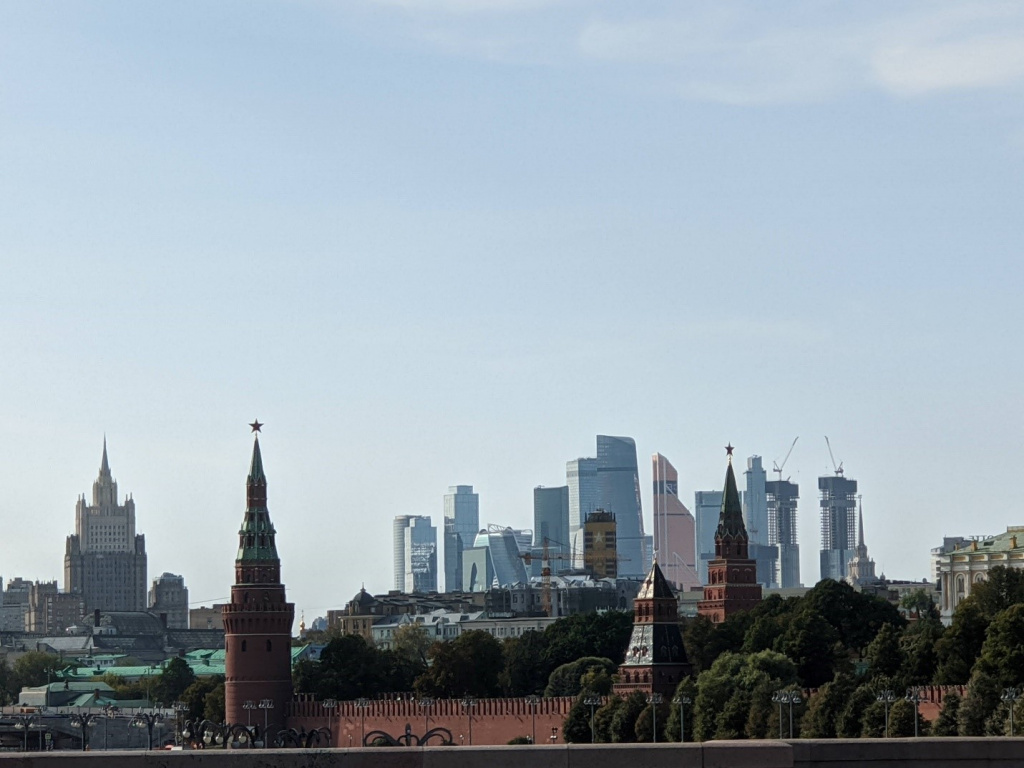